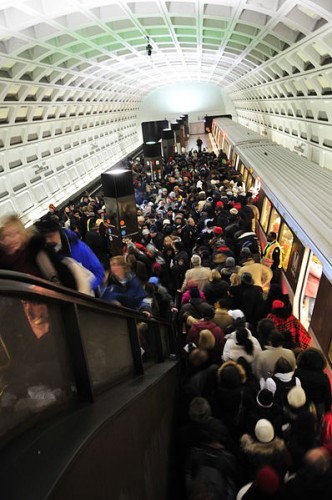 Note: The following information is from the January 2017 U.S. Presidential Inauguration.

Gates will open at 6 a.m. on the morning of the Inauguration.  Parking will be severely limited on Inauguration Day, but visitors may take public transportation.

The Swearing-In Ceremony will be held outdoors on the west front steps of the Capitol. In the past, the vast majority of tickets have been for standing room. Once underway, the ceremony typically lasts about an hour.  A color-coded map is available for download (from the JCCIC) that lists the access points for tickets holders and can be used to navigate to the correct viewing locations.

Be advised that January is historically cold and wet. Prepare for temperatures below freezing. Crowds will be large and you will likely be outside for several hours.

Tickets are needed to enter specific viewing areas (the closer ones) but the viewing area for the swearing-in ceremony is quite large, and will tentatively stretch from the Capitol along the National Mall. Not all sections of the viewing area require tickets.

All ticket holders may be required to pass through security screening, including handbag inspection. The following items are prohibited at the 2017 Swearing-In Ceremony:

Along with the Veterans Inaugural Committee, the American Legion will present … END_OF_DOCUMENT_TOKEN_TO_BE_REPLACED